Our First Noël in the South of France 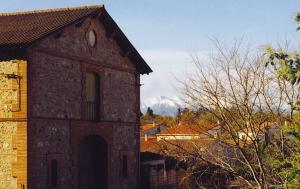 Since I can't draw worth beans, here is a sketch drawn in words of a memory of a Christmas now past.

The Sketch - Christmas night in a small village in the South of France.  The lane is dark apart from the occasional glow of an un-shuttered window for there are no streetlamps.  Behind the houses looms the dark velvet outline of the Pyrenees Mountains and above the majesty of the night sky is strewn with stars.  One star out-shines the rest in the celestial tapestry…

We arrived in France at the end of October and those first days are but a smudgy memory.  After a flight of almost 6,000 miles and a 700 mile road trip with our Husky-Rottweiler dog and a large long-haired cat, several bags, two kennels, a guitar and a laptop computer, the debut of our new life went by in a blur. This was no vacation - this was retirement and a life-changing move to a land where we knew a handful of people.  The paperwork alone was monumental but fortunately we had no idea how much of it there would be.  All we knew was that we were in the most beautiful place we had ever seen and that everything else that we owned, including our car, was in a container on a slow moving freighter crossing the ocean.  In many ways, the freedom of having few possessions was heavenly and without a TV or telephone in our rented accommodation, we noticed how quiet and peaceful it was in the old village.  Our days were anything but tranquil though as we had to meet officials, fill in forms, have pictures and fingerprints taken, go to obligatory health exams, get official translations of birth and marriage certificates, provide proof of our means of support just to list some of the requirements.  Always there was more paperwork to complete, often in triplicate and always required to be done by hand.

So that was why it happened that Christmas is the first clear recollection of our early days here.  The initial wave of paperwork was done and now all we could do was wait for the slow grind of bureaucracy to decide if we would be allowed to stay.  The festivities began the last week-end in November with the village Christmas Market.   We told the dog to be good and asked the cat not to ambush anyone passing the terrace and walked down to see what it was all about.  We were used to seeing the small weekly market here with four or five vendors selling fresh fruits and vegetables beneath the stately olive trees.  But now the square had been transformed.  Twinkling lights festooned a score of stalls, every one of them resplendent with crafts and color.  The fragrant scent of something spicy and fruity filled the air.  The welcoming voices of our friends and new neighbors encouraged us to come try the mulled wine or perhaps just a morsel of the traditional spice bread.  The convivial chaos of happy voices was peppered with the barking enticements of the stall-holders to come buy their wares.  Music drifted on the air and some of the crowd sang along to Christmas carols that we couldn’t understand.  It was enchanting.  By the time we returned to the house, our arms were filled with gifts for family and friends back in the States.  During the following days, our friends ferried us to the surrounding towns to see more decorations and celebrations.

Once the treasures had been wrapped and mailed, we realized that our coffers were nearly empty.  We decided that the gifts we’d given others would be our own present this year.  As the big day approached, we cut out paper decorations and hung stockings filled with tangerines and walnuts we’d purchased from the weekly market.  Pine branches and cones from the forest were accented with white-out from my writing bag to simulate snow.  In the evenings, I strummed Christmas Carols and we counted our blessings.  Then one morning the doorbell rang and brought us a superb present.  A technician from the telephone company stood ready with a giant drill to pierce a hole through the thick walls of stone.  An hour later, the medieval house had acquired a telephone line.  At last, after a month’s wait, contact with the outside world!  Expensive calls were made at once with promises to call again on Christmas and New Year’s Day.  The bandwidth in the village couldn’t handle much more than audio streaming, but that was sufficient and with dinner on Christmas day we listened to a production of “A Christmas Carol”.  The tangerines and nuts made a tasty dessert.   It was time to walk our animals so we wrapped up and headed out into the silent night.  The cat led the way on his extendable leash while I looked around at the quiet street and shuttered houses.  There was no sign of Christmas there.  Then my husband spoke in a hushed tone, saying, “Take a look at that sky!”  And that was the magic moment.  I looked up at the dark firmament dazzling with blazing stars and I saw one that stood out from the rest.  It twinkled first a bright red then a brilliant blue.  “Wow,” I agreed in a whisper and as I admired that star, I thought of another star that appeared in the heavens so long ago.  Then we went back to the warmth of the house to drink hot chocolate and malted milk to celebrate our first Noël. 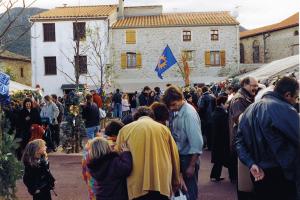 Favorite Quotes by Other Authors

The South of France Sketchbook